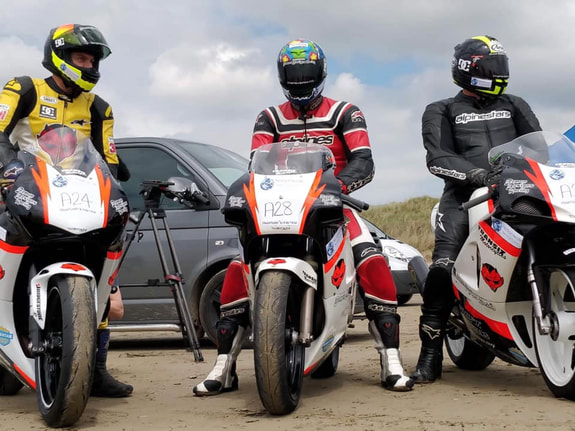 Demon Designs Racing started many years ago with teenagers riding dirt bikes in the local quarry. Over time, friendships were made and  all soon became a tight group who sought after new adrenaline fixes.
​
The young Demons eventually entered the world of off road racing, starting with Hare & Hounds endurance racing in the North of England. After three seasons and a championship win, it was time to seek new challenges. This lead some of the Demons to enter the Red Bull Erzberg Rodeo in Austria.
​
Many of the Demons have  a background working with motorcycles from Dyno (rolling road) testing at the Isle of Man TT, Butlins MCN weekends and many Hein Gericke open days nationwide. Some members also work as pit crew for larger race teams taking them to some awesome places like the Isle of Man TT and Macau Road Races
​
As most of the Demons started riding bikes on the road, this led to doing track days at most circuits across the country, and having a good craic with ya mates. As with the off road riding, it didn't take long for the Demons to start racing, Classic bikes at first, then the mental Super Sport 600 class.
​
Alongside the bikes, the Demons have also tried their hand at racing on four wheels. Five seasons in the Toyota Sprint Series netted them many race and championship wins.
​
Something a bit different is Soap Box racing, where the Demons have picked up trophies, racing at various courses. They've also had a go at Gravity Bike racing which is a top laugh !
​
The search for a new fix has led the team to chase Land Speed Records at the UK equivalent of the Bonneville salt flats - Pendine Sands in Carmarthen, South Wales, with records in multiple classes. The team still want more . . . .

​Please join me and support these lads..