What am I doing here?

2022
​February: Dial in mini interview with This Morning show on BBC1
2021
This year: Started work on my book and spending the year reflecting and living. Still learning so much about life. Getting ready for 2022 and new adventures!
2020
August 2020: Presented about overcoming Fear at the Overland Event, Oxford, England.
January 30th: Motivational Presentation given on saying 'Yes' to a purposeful life given at Imagination Technologies HQ in Kings Langley
2019
November: Twice featured as full pages on MCN, the world's biggest weekly motorcycle newspaper.
October 15th: Joined the famous 200+ mph club after riding on Jack Frost's Kawasaki ZX10R at Elvington, York.
September 2019: Became the fastest woman to ride a motorbike on sand. Obtained four landspeed records in the UK for sand racing.
September 2019: Appeared on BBC's the One Show on a segment about land speed racing at Pendine.
September 2019: Presented about overcoming Fear at the Overland Event, Oxford, England.
August 2019: Raced on the Salt Flats at Bonneville, Utah, obtained D and E licences to race professionally.
July 2019: Interviews for BBC radio and Adventure Rider Radio
July 2019: Interview for 'Under the Visor' segment with Adventure Bike TV.
May 2019: Took part in a UK Stop Speed event competition with a 600cc motorbike at Pendine Sands, Wales.
May 2019: Announcing my appointment as a pilot on a Land Speed Record Attempt at Bonneville salt flats, Utah
​May 2019: Took part in the Taffy Dakar
March 2019: Became the Italian Ambassador for the Women Rider's World Relay due to cross the country on 25-26th March! Follow my story here.
March 2019: Training to be a tour guide for Magellan Motorcycle Tours. Watch this space for more information or contact me direct.
January/February 2019: Articles written for Motorcycle Sport and Leisure and Overland Magazine. 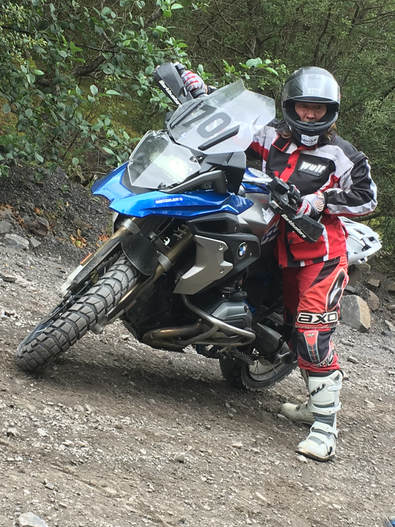 If you look closely, you can see the fear in my eyes.. taken at Off Road Skills course, run by Simon Pavey June 2017
THE BACKGROUND STORY
I like to think on things, to ponder about life and why things happen.  I do this a lot while I ride but to be fair I also do it in the middle of the night. Motorbike adventure riding and racing is a BIG part of my life now, but it wasn't always so. I learnt to ride when I was 17, it was for purely practical reasons as I left school and went straight out into the big wide world  and needed something to get me the 1.5 miles to the business park where I worked. I passed my full test when I was 24. I didn't ride a bike for the next 24 years.

I've had a good professional career in the field of publishing, both words and numbers. This started in educational and library spheres before moving on to the subject of trucks and big ships. I've met some cracking people, been places I never would have dreamed I would get to and am proud of a few things, but it never really fulfilled me. Never made me jump out of bed in the morning screaming 'I'm alive!' Ultimately, the last 26 years only seemed like a stepping stone to a time when my kids were grown and I could go back to where I left off as a teenager, when the world was a big playground that lay at my feet and I would giggle with wide-eyed excitement at the beauty of the stars and the moon and wonder what it was that made people tick.

In 2015 I spent some time really pondering about happiness and where it comes from. I did a lot of deep thinking about how to define it and what it meant to me. Over a few months I wrote down all those things that made me smile on a big A2 piece of paper and stuck them on the wall. I then carefully categorised and prioritised them.  I wrote down quotes that were meaningful to me. I read books on philosophy, psychology and martial arts. Books on altered states, reality, perception, physics and Kafkaesque novels. Practiced yoga, exercised and meditated. All this enquiry led me to understand some important truths about myself and to know some things for certain.

Put simply, you are responsible for your own happiness. There is no 'one' thing that will make you happy, no one purchase, no one life event, no holiday, no promotion, no lottery win. It is a collection of behaviours you need to identify that are consistent with your internal values. Then, once you've figured them out, you actually have to live by them. Many people do this naturally but others can't seem to understand why, when they have all those things that marketing tells them should make them happy (the car, the house, the lifestyle) they're still not happy. 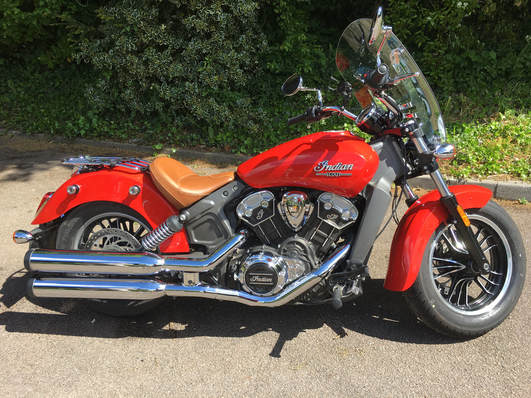 My first big bike. Indian Scout. Absolutely gorgeous.
From this exercise I knew that Freedom and Adventure were extremely important to me and fundamental to my happiness. So I did something about it. In 2016 I took a sabbatical and sailed from the Caribbean to New York, visited a rain forest in Panama, got to see the Canal just at the point it was being widened and ... oh yes, rode through Death Valley on a motorbike. Of all those things, the one I least expected to leave a lasting impression was the motorcycling. I hadn't ridden a heavyweight.. ever. It was crazy, I was terribly scared and unprepared and there's a story in how I got through that, for another page. The bike of choice out there? An Indian Scout. What a great machine, it was love at first ride. Of course, they don't handle mini roundabouts terribly well but hell, this was the bike for me. I went looking for a Scout as soon as I could back in the UK. It was meant to be, an Indian dealership was opening 1.4 miles away from me on the same business park where I worked in my first job at 17. Karma.

Since that time I've ridden many countries around Europe, had fun in the dunes in Morocco and enjoyed cruising around England and Wales, in particular the Brecon Beacons and Snowdonia. I've met some amazing, awe-inspiring people who share those values with me and together we've had some incredible times. I've written some articles for magazines, created my own YouTube channel and generally enjoyed the freedom to create.

Then came the biggest adventure of my life. I got the chance to race on the Salt Flats at Bonneville during Speed Week, August 2019. That story is one of twists and turns. Of dreams being made, hopes dashed and of friendships pulling through.

I thought that would be it, but it was just the beginning. Just a few weeks later I became the Fastest Woman on Sand (Motorcycling) and broke into the 200+ mph club on a borrowed Kawasaki ZX6R. Just one run is all it took having never ridden a turbo bike before.